Before Christianity arrived there was also a sacred grove just south form the Spring of Saint Lawrence. The grove with sacrificial stones, sacred well and sacrificial ruins was used to worship the Finnish Pagan Gods and Spirits. Two ancient cremation burial fields have also been found nearby.

The sacrificial ruins consist of two mounds from Iron Age that are approximately 25m apart. The mound in northeast has been examined but no burial artifacts were found. Pieces of dishes, iron and animal bones were found between the rocks instead and therefore the mound was considered to be sacrificial. Ruins of same nature, that have been dated to 0/500 A.D. have been found in both Southern Finland and Estonia

Tradition tells that people used to make their sacrifices by placing for example grain, milk and fish inside the cups to bring good luck for harvest and hunting. Some believed that rainwater from the cups of a sacrificial stone had healing powers and various pains and aches could be banished inside them. Moreover some researchers suggest that the holes in the stones might have been made for the dead to use as a pathway to afterlife. This way a stone with many holes could have been meant for many deceased, perhaps a family. Through the cuplike holes it would have been possible to connect with the deceased and the sacrificial gifts left would go to them in the afterlife. Especially the sacrificial stones nearby ancient cemeteries have been believed to be sites for worshipping the deceased. Use of sacrificial stones begun during the Iron Age and continued at some places, locally and after Christianity -secretly even until 20th century. 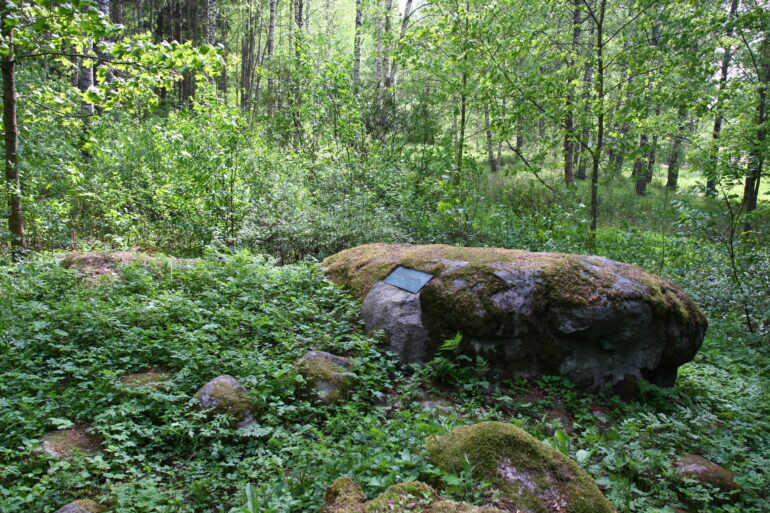 Cremation burial field is a collective burial site that is not visible above the ground. The bones and pieces of burial artifacts of the deceased are collected from the funeral pyre and spread on a wider area so that individual burial sites cannot be told apart. There are stones thrown on top of the site but they do not form any mounds. The burial artifacts have often been fired on the funeral pyre and at times intentionally damaged in other ways too. It was believed that doing so, the soul of these artifacts was set free to follow the deceased to the afterlife.

Use of cremation burial fields was the most common tradition of burial for the countryside population during the Iron Age 600-700 AD. It was said to be a precisely Finnish burial tradition.

Research tests have been made on the site and pieces of clay dishes and burned bones were found as well as piece of bone artifact with line decorations on it.