The Vähä-Kurki croft was built in 1889. To its present location it was transferred from Vananda’s Manor in 1964. The croft is a typical two-roomed cottage. On the right side you will find the main room that served as living room where handworks were made in the evenings. The crofter family would also sleep there. On the left side is the kitchen where the help and temporary guests would sleep. This crofter´s cottage was inhabited until 1951. 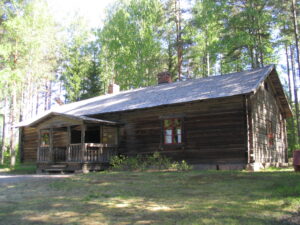 The Heta´s cottage was built in 1868. This kind of a small cottage was typical for elderly people and for people who lived alone. The first known inhabitant was a woman called Hedvig (Heta) Selin who was a seamstress. She made her living by making dresses for women and also worked for the Paturi house to pay her rent. Heta’s cottage was transferred to its present location in 1965. 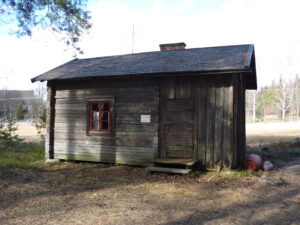 The chimneyless hut was built in 1894. To its present location it was transferred in 1965. It was inhabited until 1930 after which it still served as a drying barn. The essential part of a chimneyless hut is a bricked-in fireplace without a chimney funnel. 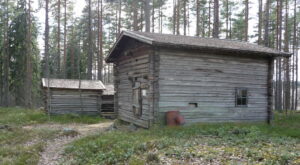 The stable- cowshed building was transferred to its present location in 1966 from Ratalahti. The outbuildings were added gradually. At first the cowshed was built in 1902, then the barn in 1904 and the woodshed in 1905. The stable with stalls for two horses was built in 1907. 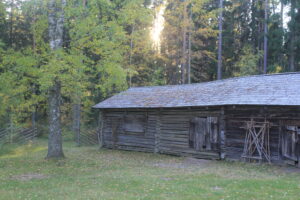 The building was donated to the museum in 1968 from Ylöstalo in Haapaniemi. Smith´s workshop was used by a smith or a skilled master for forging products such as nails, horseshoes and sharp-edged tools. At the rear of the building there is the smith´s workshop´s fireplace, the forge. 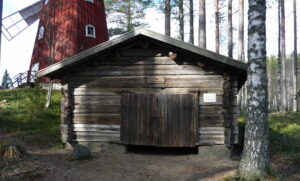 This mamsell-type windmill was built in 1889 to Sipilä house in Leppäkoski. To its present location it was transferred in 1964. There were three stonepairs in use in this windmill. The top of the windmill was turned whenever the direction of wind changed. 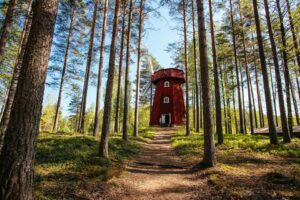 In addition to bathing the chimneyless smoke sauna was used among other things for drying malt and smoking meat. It was also the place for health treatments such as cupping, massaging and even for giving birth. This smoke sauna was donated to the museum by Olavi Lunnas and Erik af Enehjelm. 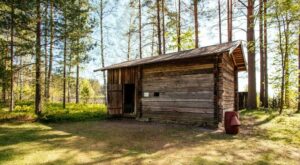 The drying barn dates from the years 1850-1860. To the museum this drying barn was transferred in 1966 from Sydänmäki in Lampello. It was a building for drying the sheaves of corn prior to cleaning and threshing corn in the threshing room attached to the drying barn. Drying barn was always placed outside the yard because of the danger of fire. 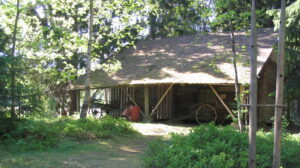 The Mäyrä storehouse was built in 1804. To its present location it was transferred from the Mäyrä croft. For example dairy products, salted fish and meat and smoked meat were preserved in this storehouse. The Iso-Kurki storehouse was transferred to the museum area from the Iso-Kurki croft from Vananda´s Manor. Grain was stored in bins and on the shelves there were boxes where for example flour and grits were stored. 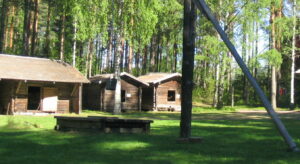 This granary was built at the beginning of the 19th century. To the museum it was donated from Kyöstilä house in Vähikkälä. The purpose of the granary´s structure was to keep the floor dry and protect grain from moisture. The half-stock in the substructure was made to protect this granary from mice. 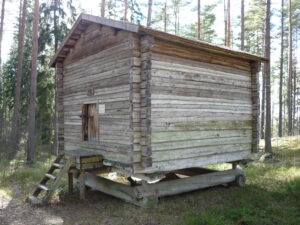 The Shadoof is a device used to gather water from the well, consisting of a long pivoted stick with a bucket on the end of it. 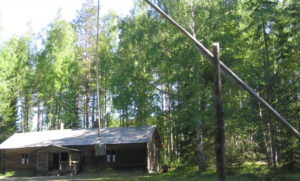