The Church of St. Lawrence in Janakkala

The Church of St.Lawrence is the youngest medieval stone church in Tavastia region. It was probably consecrated on September 19, 1520. Its builder is considered to be Åke Tott, the Lord of Häme Castle at that time. Therefore three coats of arms of the Tott family are still to be seen in the church.

According to tradition the first church was built on this site as early as the 13th century, after the first crusade to Finland. The wooden church was probably situated in front of the present belfry. During construction of the road that is now passing the church several graves were found. These graves have presumably been located under the floor of the previous, wooden church. 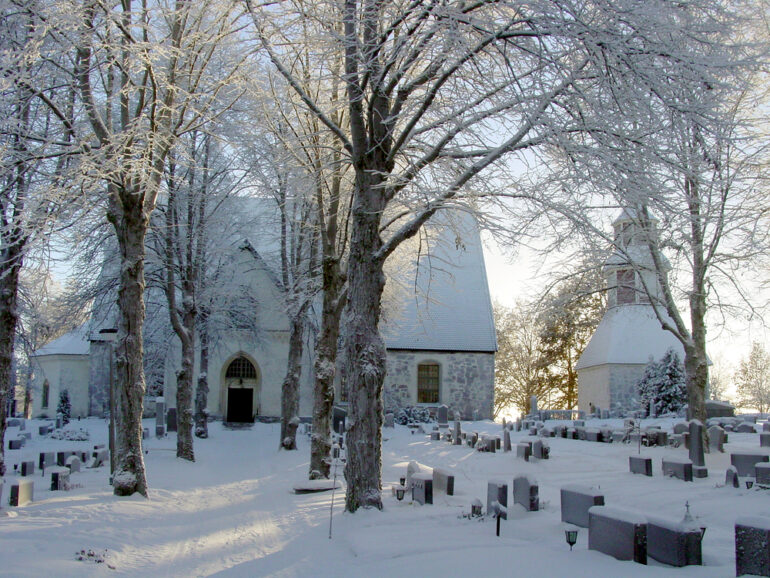 The Church of St. Lawrence was originally, rectangle shaped with a vaulted brick ceiling and with single-nave. The vestry was located to the left of the altar facing the north. On both the southern and western sides there was probably a porch.

The church was radically altered in in 1840’s, when the the half-octagon shaped new sacristy was build and the church became cruciform, as designed by the two empire style architects Engel and Lohrmann. The altarpiece “Jesus on the cross” was painted by B.A. Godenhjelm. In the beginning of the 2Oth century the church was renovated in the jugendstil, the German version of Art Nouveau by architect Armas Lindgren.

In 1933 the interiors of the church were restored to its former style by the design of Professor Carolus Lindberg, but only a year later a fire destroyed the organ and the interior of the church to such an extent that new restoration was necessary. 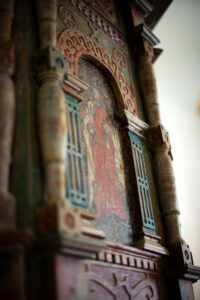 During the years 1992-1993 a basic renovation of the interior was carried out according to plans made by architect Erkki Pitkäranta. The choir was refurnished to answer the demands of the present day. The altar table, for instance, was moved away from the wall so that the priest could stand behind it when officiating at a communion service. During the repair of the pulpit old paintings were discovered under several layers of paint. It was decided that the pulpit should be restored. The whole church was repainted in accordance with its colours.

The fourth organ of our church was installed in 1993. It was built in Martti Porthan’s organ workshop. It is completely mechanical with 40 registers and it represents the North-German baroque style. It was modelled after an instrument from 1660. The organ has almost 3000 pipes, the smallest being 10 millimetres long and the largest 5 metres long.

The church has preserved many antiquities, such as medieval sculptures of saints. On the right-hand side of the altar you can see a sculpture of St. Lawrence, made of one piece of oak. It dates from the beginning of the 14th century and was made in Gotland.

On the right wall of the choir there is a crucifix from the 15th century that was restored in 2000. On the left-hand side of the altar is a sculpture of St. Olav, also dating to the 15th century. Statue of St. Stephen can be found on the left side from the doorway, at the back of the church. The crucifix and the statues of St. Lawrence, St. Olav and St. Stephen have probably been in the previous church, too. Jacob the Elder is on display in the northern wing. The statue originates from the 16th century. The rest of the old sculptures are kept in the Finnish National Museum. The oldest of the church textiles are from the 1930’s, most of them are donated. 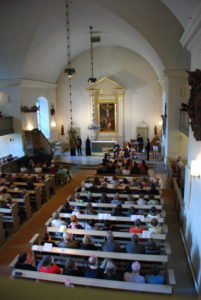 The pulpit originates from the early 1660’s. The coats of arms of Uggla, Brunow, Stierncreutz and von Franck families are from the same century. They are the burial coats of arms for the Lords of Manors.

The chandeliers were donated to the church. The oldest above the central cross of the church is made of brass and dates from the 18th century. The mission candelabrum “the tree of life” next to the sculpture of St. Stephen was donated by the propeller factory called Finnscrew.

The belfry was constructed by the famous Finnish church builder Martti Tolppo. It was completed in 1785. The earlier, all wood church tower was built in the latter half of the 17th century. The church bells date from the 17th and 18th centuries. Across the road there is Tarinmaa school and the Church community center built in 1950’s.The Janakkala parsonage neraby the church was built of logs in neoclassical style in 1842.

For centuries people have gathered in the grey granite church of St. Lawrence to hear the word of God. Travelers are also welcome to the traditional service at 10 am every Sunday. You can get further information on numerous occasions and events from the parish Office situated at the Turenki parish hall.